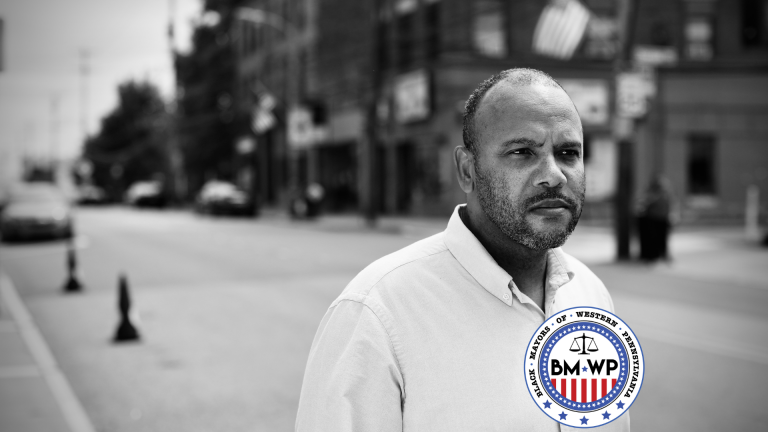 Val Pennington, the former Bellevue Borough Council President, is the first Black mayor of the borough. The native of Pittsburgh’s East End has lived in Bellevue, which sits along the Ohio River and has a population of 8,300, for more than 14 years. He has said he entered politics because he cares “about social justice and fairness and ethics.”

Who are some of your African American political /leadership role models (historical or contemporary)?

What have you learned from them?

Mr. Marshall said, “Do what you think is right, and let the law catch up.” This is a great paradigm to combat those who argue legality as morality.

Mr. Mandela teaches us the value of perseverance, and the glory of redemption. Mrs. Parks shows us the merit of doing what is right – even at the potential of personal jeopardy. Ms. Abrams demonstrates strength and inspiring leadership in the face of blatant oppression and suppression. President and Mrs. Obama are the embodiment of excellence and unimpeachable grace under fire.

How do these influences show up in your problem-solving, community building?

Those figures fuel me to fight for what is bigger than myself, and they serve as a rudder for my ethical sensibilities.

What are the three most critical challenges to your municipality?

As a leader, what should constituents hold you accountable for?

I’m able to bridge gaps between groups that heretofore have had less than amicable relations. I’m a skilled communicator who is only interested in what’s equitable for all, particularly the residents. I’m elected to make choices for the greater good, and I take that seriously. I don’t tolerate or respond to ad hominem-style attacks, but I am always open for real discourse.

Is the work of an African American mayor different from that of a white mayor? Should it be?

The work of an African American ANYTHING is different from that of their white counterpart(s). It’s true that there’s a different standard: one must be exemplary just to be viewed as average. I look forward to the time where that’s not the case, but for now will continue the only way I know how.

Your role, in many ways, is symbolic. How do you make sure that it is substantive, too?

It’s possible to be a substantive symbol. Mrs. Parks would be such a figure. Even if she had done NOTHING else after refusing to leave her seat on that bus, she would still be an icon. I embrace what my mere presence means to people of color—as well as striving to deliver real improvements in their stature and status in our community.

In such a demanding role, how do you factor in socializing—for instance going to see ‘Hamilton’, or attending a hockey game, or date night?

Maintaining a balance to include my personal social life has been challenging. My spouse has been an absolute rock for me, and this position is definitely a family effort. I’m trying to establish more “date nights,” whether they happen inside or outside our home.

Between the World and Me by Ta-Nehisi Coates, The Hate you Give by Angie Thomas, and What Doesn’t Kill You Makes You Blacker by Damon Young.

Filet mignon with a balsamic glaze/gorgonzola, mashed potatoes, and asparagus.

What would you like your legacy to be when you leave this office?

That Bellevue is now ready to accept ALL of her residents as leaders and important members of the community. And that my own children are inspired to grab whatever ring they aspire to.