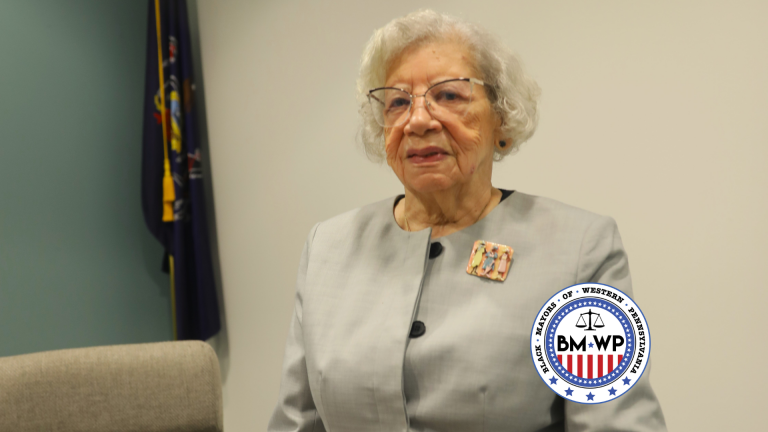 Betty Copeland was elected in 2018, at 83, becoming the first woman, the first Black person and the first octogenarian to hold the mayor’s seat in Bridgeville, an Allegheny County borough of about 5,000 people. In 2021, she was awarded Mayor of the Year by the Pennsylvania State Mayors’ Association.

Who are some of your African American political/leadership role models (historical or contemporary)?

What have you learned from them?

Martin Luther King Jr.’s concept of the “beloved community,” where everyone works together to achieve an optimum outcome for their neighbors, and his willingness to be a servant leader—even though he was one of best-known people in the world.

Mary McLeod Bethune was an educator, philanthropist, humanitarian and civil rights activist who strove to rise to the top of every organization to which she belonged. She worked well with every kind of person, from presidents to rural farmers, and worked untiringly for equality.

Marian Anderson, the famous classical music singer whose performance on the steps of the Lincoln Monument had a major impact on desegregation was important to me as an example of leadership. Her poise in the face of strong opposition by segregationists taught me to hold on to my principles and to do it with as much class as the situation allows.

How do these influences show up in your problem solving?

I have always been a “principled” consensus maker capable of bringing people and organizations together to benefit the community. In addition, following MLK Jr.’s example, I am a servant leader who will not ask someone to work harder than I am willing to work. Also, I will work with anybody who wants to work with me and I will truly listen to his or her ideas.

What are the three most critical challenges to your municipality?

The three most critical challenges are traffic, parking and localized flooding. Bridgeville is a focal point for traffic because it is only one-square mile. The surrounding communities all continue to grow quickly. The most traveled roads in the area pass through Bridgeville, or lead to Interstate 79, which is the fastest way to reach Pittsburgh to the north, or Canonsburg/Washington to the south. Consequently, traffic is always backed up on both ends of town. Plans have been made to improve the situation.

Secondly, the number of parking spots is limited near the local business district. The lack of area to add additional parking during peak business hours constrains the revenue streams of local businesses, as customers must often continue circling until a spot opens up. Finally, localized flooding remains a challenge. The McLaughlin Run floodplain and climate change has traumatized the lowest parts of town on an ever-increasing basis. Though improvements have been made, there is still much work to be done before Bridgeville is properly protected against future flooding from storms.

As a leader what should your constituents hold you accountable for?

Constituents of Bridgeville should hold me personally responsible for all of the duties of my elected position as mayor. I should be both approachable and reachable by voters and should “hold up a light over Bridgeville” so that it is seen as a great asset and neighbor for the surrounding communities.

My experience in the many community service organizations over the years helped me gain experience in this arena. I’ve been involved with the local PTA, Friends of Public Library, Rotary, Chamber of Commerce, Guild for the Blind, First Baptist Church, etc., so I know how things get done in Bridgeville. I also work to maintain the respect of my colleagues in Borough government.

Is the role of an African American mayor the same as a white mayor? Should it be?

Ideally, I think we all should be working for a world where race does not matter. Unfortunately, this is not yet the case. The overwhelming reaction of the media to me being elected as the first African American and woman at 83 years old elected to mayor, reminds me that I am different all the time. But, basically the duties of the job are the duties of the job and they are the same for everybody who assumes this position.

Your role in many ways is symbolic. How do you make it substantive too?

I work hard and make sure I’m prepared so that members of Borough government and constituents know that I take the job as more than a symbolic position.

In such a demanding role, how do you factor in socializing such as going to see ‘Hamilton,’ a hockey game or date night?

At this stage of my life, it is my grandchildren and especially, the great grandchildren that I love unconditionally and want to see as much as possible. I travel to [visit] them as often as I can and have learned how to do video calls so we can communicate as often as possible. Otherwise, it is a simple matter of priorities, scheduling and getting my rest.

The Bible, The Other Black Girl by Zakiya Dalila Harris and Kindred by Octavia Butler.

Fried clams, a baked potato with sour cream, salad with blue cheese dressing, and a glass of wine.

What would you like your legacy to be when you leave this office?

I want my legacy to be that I was an advocate for the concept of the “beloved community.” I want to be considered a major asset to Borough government and a trusted steward worthy of the public trust placed in me by the voters. Lastly, I hope that others will learn from my experience and follow my lead by running for office. I’m hoping that women and African Americans will believe that they can run for office and win.