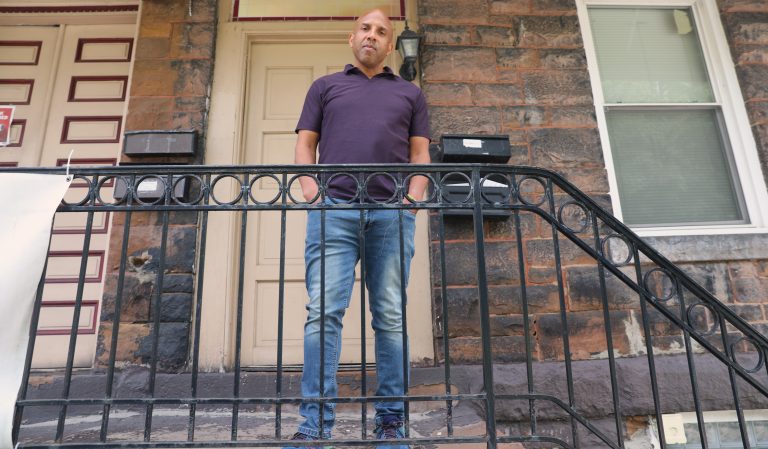 Justin Laing, the Principal at the anti-racist leadership and strategy firm Hillombo, is not your average Diversity, Equity and Inclusion consultant. Prior to founding Hillombo in 2017, Laing was a senior program officer at the Pittsburgh-based The Heinz Endowments, one of the largest philanthropic organizations in the U.S. focused on community building in southwestern Pennsylvania. Laing spent 11 years there. His professional trajectory in the nonprofit world presents a powerful story of dedication to the Black Pittsburgh community.

“My father is an Afro Caribbean immigrant to this country, my mother is [descended from] English settler colonialists from New York,” he tells BlackPittsburgh.com, reflecting on his upbringing.

Laing was born in the early 1970s in Silver Spring, Maryland, a popular suburb outside of Washington, D.C. Growing up so close to the nation’s capital was just another thread of irony in the post-colonial tapestry of Laing’s early years in Maryland. He attended the Washington Waldorf School, a private school with a curriculum derived from the philosophies of Rudolf Steiner, who took a holistic approach to education that includes intellectual, spiritual and physical development.

In his education and in his family life, Laing subconsciously wrestled with the absence of any connection to his Black diasporic heritage. It was a “deeply troubling experience” that defined his teenage years.

“My father saw himself as a direct descendent of the English crown,” Laing says. Still, Laing looked to Jamaican culture and music to discover what he believed he was missing in the early stages of his life. “I really didn’t go into it for political reasons,” he says about fixation on developing a Black consciousness. “I went to it for family reasons.”

For Laing, it was the allusions in the music—to Marcus Garvey, European colonialism, and Rastafarian practices—that helped foster his intellectual awakening.

“I’m the person who reads an article and goes through every footnote,” he shares. In his studious engagement with reggae music, Laing discovered the Jamaican, Pan African scholar Horace Campbell and his book Rasta and Resistance, which deeply influenced him.

By the time selecting a college came into focus for him, he was done with the culture of private schools. He chose to attend the University of Pittsburgh because of this and his interest in sports – watching them, not playing them.

“The Black Studies Department was still holding some major people from the Black Power era: Rob Penny, Barbara Sizemore, Vernell Lillie, and Dennis Brutus,” he notes. Laing drank from the well of their collective knowledge and filled the absence he felt as a boy.

“I went to that place as a refuge,” he says. “When I found out you could study this stuff and get a degree I was like: ‘This is like getting paid for what you love to do anyway.’”

Even as his father challenged him on his choice of major—asking him, ‘What are you going to do with that?!’—Laing, like many other Black Pitt students of that era, understood the cultural and political value of Pitt’s Black Studies Department.

Laing eventually went on to Carnegie Mellon to earn a Master’s Degree in Public Management with a focus on the Arts. But he never left Black Studies. In fact, in many ways, it became embedded in his life’s work.

With his firstborn on the way in late 1992, Laing needed to find work—and he did, as a probation officer for Allegheny County. But even then, his extracurricular activities at Pitt (holding several offices with The Black Action Society and initiating an African Cultural Center committee to lay the groundwork for an African Cultural Center on campus) remained his passion upon graduation.

“I was a serial committee starter,” he tells us. “A bunch of us always tried to take the work from the Black Studies department and apply it.”

Laing continued this practice beyond Pitt through an organization he founded called The Village for an African Cultural Center. The organization applied the knowledge gleaned from Black Studies courses to cultural programming in the real world like “Marcus Garvey Day” and “Fred Hampton Day” for the community in the Hill district.

“I left the probation (office) in ’95 and went to work for the Hill House, under Carl Redwood, (doing) youth fair chance case management,” Laing says. “But the whole time I was still doing The Village.” Laing’s experience working in the local probation office exposed him to some of the systemic challenges that he would ultimately work to dismantle later on in his career.

Cutting his teeth in the community programming space challenged Laing to think more and more about the resources available to organizations committed to advancing Black arts and culture in Black communities. He wrote his first grant to the Pennsylvania Council on the Arts to gain support for the work that The Village’s community work. The Council didn’t consider his community engagement, even with some culinary arts programming, as “art” proper—so they awarded the group a consultant, but no funding.

At this point, Laing had found his purpose—a life working to advocate for arts, education and culture in the Black communities of Pittsburgh. But it wasn’t until he learned the Afro-Brazilian practice of capoeira that all of his planning, organizing and ideas began to come together.

A powerful martial arts practice with deep roots in the Diasporic traditions, capoeira is also an undeniable art with the kind of flashy performative potential that was undeniable in the context of the grants and funding world.

As the work of Nego Gato grew, Laing began to focus more on engaging the funding sources critical to the financial support of non-profit organizational work.

“The real pathway to the [Heinz] Foundation,” he says, “was the writing of grants and meeting program officers,” he says.

Laing was hired as a program officer for the Heinz Foundation in 2006 and worked in the arts program sector there. His first goal was to shift the arts education funding towards Black cultural work. When asked if the prestigious predominately white funding institution knew whom they were bringing on board when they hired him, Laing chuckled.

“Money was everywhere,” he says. “When I walked around [for] the first time and I’m looking at the art on the wall and these pristine places and there’s a refrigerator full of Coke and there’s always coffee – [it was] way different than the nonprofit I built with Gato.”

But Laing also knew from his education and from his practical experience in community arts organizing, that things don’t always happen as planned.

He continued his approach of research and practice. This led him to support culturally responsive pedagogy in local educational programming, but also revealed the challenges associated with the entire non-profit sector.

“I’m working for a foundation and I’m forgetting the total cynicism of grant writing, grant seeking and giving,” Laing says.

Laing continued the work through the foundation, but he also continued his own education. One major lesson that he learned as a program officer was actually a reminder of the indispensable value of organizing in the community. He decided to work with smaller groups of people to establish a habit of getting feedback from folks on the ground in the neighborhoods that the foundation served.

These days, Laing is as thoughtful as ever and maybe more radical than he was in his leather medallion-wearing days. As the lead at Hillombo, which he founded as a catalyst for ending the business-as-usual approach in the nonprofit sector, Laing applies Black radical, Black feminist, and socialist approaches to “disrupt our participation in the nonprofit industrial complex’s systemic oppression.”

To date, Hillombo’s vision has directly impacted philanthropic approaches across the United States, including through organizations he’s consulted in Pennsylvania, Arizona, New Jersey, Illinois, and Minnesota.

Laing advises his clients (especially predominately white nonprofits and foundations) to center alternatives to systemic racism. These anti-racist approaches, he believes, result in more sustainable relationships between philanthropy the communities that they serve.

From outsiders looking in at his time at Heinz, this may seem like an abrupt departure from a successful career as a program officer. But for those who know Laing’s roots and his deliberate rootedness in Black radical traditions, his work at Hillombo is a return to form.