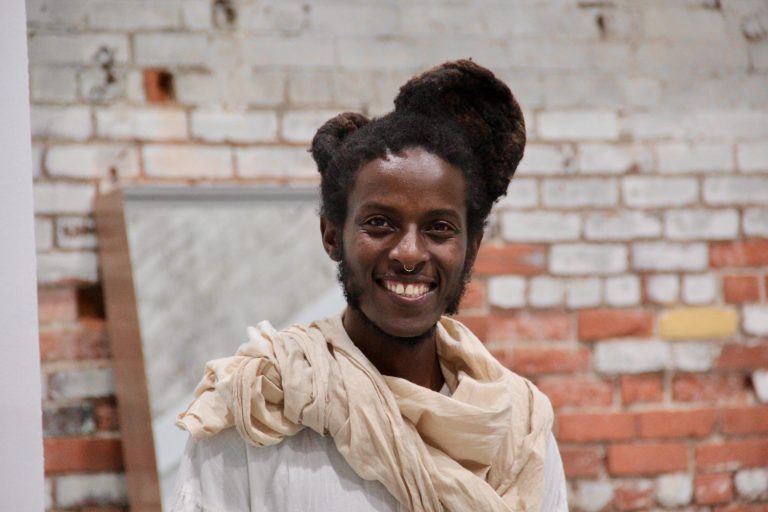 Cedric Mizero, a Kigali –based, multi-disciplinary artist and fashion designer during a recent month-long residency in Pittsburgh. Photo Credit: Ya Momz House, Inc.

FOR A VISITING ARTIST, LOCAL IS GLOBAL

A little more than a decade ago, Cedric Mizero was a secondary school student living in Gishoma, a small village in the Western Province of Rwanda.

Learning was sacrosanct there. And the sacrifices for education were so valued that when Mizero lost a schoolbook, he so feared the wrath of the school district and his father that he fled his hometown, escaping to Kigali, Rwanda’s capital, to live with his sister.

He was welcomed in the city and exposed to a vibrant arts culture that he embraced. The self-taught artist, who experimented with fabric and design, also performed traditional dance, then, modern break-dance, and finally tried painting, sculpture, and other visual art forms.

Kigali became the birthplace of Mizero’s identity as an artist.

While the fashion and arts scene in the city stimulated Mizero, his evolving creativity continued to be influenced by his deep roots in village life, in addition to the ethos of economic and social class, matriarchal roles, and the splendor of crafting with local materials.

In the village, where poverty made everyone equals, family and neighbors were united in the struggle to care for each other. Here, Mizero learned to embrace collaboration, not individualism and competition. These experiences fueled his artistic vision and powered his improbable journey from Rwanda, one of the smallest nations in Africa, to Pittsburgh, and emerging as an internationally heralded creative.

Mizero was in Pittsburgh for a month. He’s now returned home, but his exhibition, Murinzi, is at the Frick Museum and Art Center in Point Breeze until Oct. 16. The artist’s visit to town was sponsored by FashionAFRICANA, a Pittsburgh-based global multi–media program and educational platform that explores Black beauty, culture and history through fashion and art.

Demeatria Boccella is the founder of FashionAFRICANA. About a year ago, she met Nelly Wandji, a French artist/curator who shared a similar passion for elevating Black culture. Wandji knew of Mizero’s work and suggested that FashionAFRICANA might find some way to create a residency for him, so he could come to Pittsburgh to create and share his artistic vision.

The residency has allowed Mizero to witness the highs and lows of being Black in Pittsburgh. He found joy in a recent meeting with 40 sixth-graders from a McKeesport charter school. Their innocence, interest in art, and genuine fascination with Africa made Mizero “feel happy.”

However, a couple of nights out at Pittsburgh restaurants weren’t as pleasant. At one place, the management refused him food because they thought he was homeless. In another, after befriending a few other Black Americans whom he had randomly met and shared a meal with, the restaurant charged him for everyone’s meal.

Mizero says the negative encounters in Pittsburgh remind him of the “past things he’s seen in films and does not show Pittsburgh as a futuristic place.”

It’s also a reminder of how much he appreciates the African experience and his homeland. In Rwanda, he says, the narrative is that Black Americans are privileged, but being in Pittsburgh, he recognized that many are realizing “Africa’s power and light,” and the continent’s other gifts.

When he returns home, he says, one lesson he’ll share is that “America is not as shiny as we think. I know it is a privilege to be from Africa. It’s good and beautiful and what I have is enough.”

Mizero’s Pittsburgh experiences continue to teach him why his art, which, he says shows love is so important.

When he first started as an artist, Mizero used fashion to tell stories, drawing heavily from his personal and cultural experiences. The youngest of 12, he always saw the difficult work his mother, and other women like her, contributed to village life. He also saw beauty in their labor and craft.

One of the 29-year-old artist’s first much-heralded projects was 2017’s “Strong Women,” an exhibition featuring photography, fashion, and mixed media that gave voice to the strength of rural women in Rwanda.

He chose fashion as a medium for “Strong Woman” because of its power to capture attention and highlight the truth of women’s stories.

Using beauty to reflect on difficult truths is part of Mizero’s mission. Individual and cultural trauma, he says, is part of his body’s “memory card,” which he shares through his art.

Mizero is very much aware of the 1994 genocide that Rwandan Hutus committed against the Tutsi minority ethnic group. The violence tore the nation apart. Today, Mizero, and many Rwandans, accept neither identity.

“We only call ourselves humans,” he says. “No one belongs to a tribe; we are all Rwandans. In the present we don’t want to separate.”

But moving forward does not mean forgetting and Mizero’s work is part memorial to many who were slaughtered as they huddled in Catholic churches for refuge.

In questioning death in sacred places, he created the project “Murinzi,” which means protection in Kinyarwanda, an official language of Rwanda. The project uses religious symbols (such as stained glass), materials (like rosary beads), and local fabric to challenge views of security and faith.

His creations also emphasize shoulders and he uses the weight of the material to signify the burdens of family, work, and tradition that he saw the women carry through village life.

Large parts of Rwandan women’s craft traditions – weaving, embroidery – show up in Mizero’s creations. “Materials have stories,” he says. “Objects hold memories and I bring them back to life.”

Another object that shows up frequently is the calabash, a reference to the sanctity of life and the role the gourd had in allowing women to carry milk and make butter to feed their family. Part of his work with the project was to create beauty with these items, imbuing them with new meaning as a way of “bringing the woman out of the house,” and out of the role assigned to her.

This work, as is much of his art, is inspired by Mizaro’s mother. “I’m in love with my mom,” he says.
Though she does not show up in any of his art, she is the “thread” that is represented and woven into all the women who do show up as he addresses female power and relevance.

Mizero has been recognized and participated in the International Fashion Showcase, New York Fashion Week, and continues to evolve as an artist. “I don’t want to box myself in,” he says, as he now considers film projects and weighs writing a novel.

“I can direct my work into different places,” he says. “The universe decides for me. I just accept and allow myself to be the channel.”